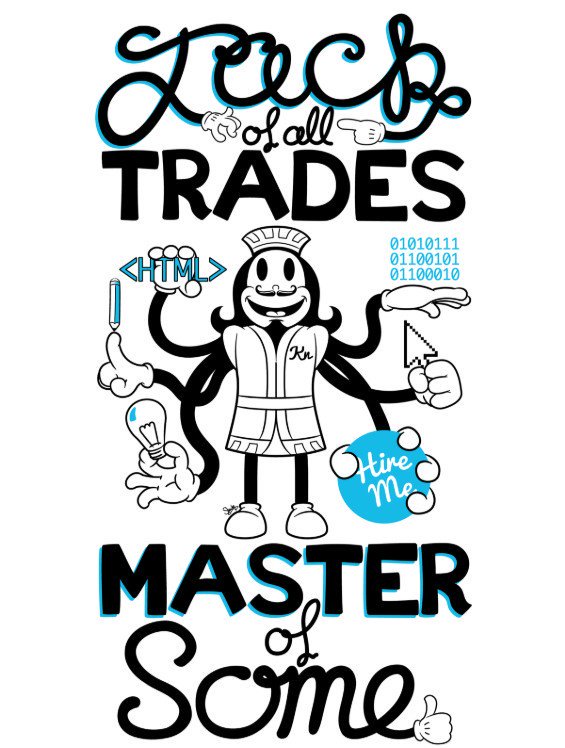 Everybody wants to be a jack of all trades but many dont bother to master anything specific. This blogpost tries to analyse this topic from trading point of view.

As an human being, we tend to naturally gravitate towards things that are complex and the situation worsens if we are an engineer 😊 (you know what i mean). As many believe, the complexity of trading is not in the charts, but it is nicely wrapped up in the mind. We see many wannabe traders and few experienced ones trying to be jack of all trades (in trading the markets).

Knowing to do a little bit of everything is very good in life as we ‘learn’ how to learn and we fit well in leadership roles. But it can also lead to lot of distractions and eventual burnout.

Trading the markets can be simple but not easy

Trading itself is not overly complicated. Well, lets look at it closer –

1) Markets only go up or down (they can consolidate, but they have to leave that state in a direction). Essentially, there are only two directions. Deciding how far, how much room to allow it to breathe can get complex, but it still comes down to one of two choices 😊

2) Markets will only move in one direction for so long before they change direction. Traders study on where the change of direction should most likely occur. Each trader might have different notion/concept for trend reversal but there has to be one.

3) Allowing winners to be larger than losers beat a lot of things that could go wrong.

These 3 simple things may require a lot of study/practice/patience and learning, but not anything that seems “complex”. Maybe price analysis, but even that can be simplified to far less than quantum physics 😊

I have a 2 year old son who started walking few months ago. As humans, our ability to balance on 2 legs is complex (try programming a robot to do it as well as an human – a Robot can never walk as gracefully as a developed human). We had to practice that skill as babies until it became second nature.

But today, while there may be a lot of complexity occurring in the background for our bodies to maintain balance (and we could probably map all of that with tons of analysis and indicators/charts), if we stand up right now, does any of that really matter? Absolutely not !!

The complexity of balance is just going on silently in the background. The study of anything worthwhile can be complex, but is complexity a required point of focus? A big question to ponder.

I have never done skiing but can draw one more analogy from it. Balance is mandatory for that wonderful sport, but that point should never enter the mind of a skier.

Gravity is also mandatory, and complex, but still not on my checklist. Skiing does not require me to be aware of the complexity. What does matter really is that ‘have I practiced enough to have the ability to ski safely?’ As simple as that. If the answer is ‘No’ to that question, then the prudent thing would be to get back to the basics/practice arena.

In the pursuit of simplicity, by focusing on one or two markets over time, it can harness the potential of a trader to somewhat “understand” what the market is saying at a particular moment. This cannot be immediately translated into profits but the trader can ascertain the nuances of his methodology in a more meaningful way.

Long story short – focus on a specialty instead of taking the shotgun approach and devote the attention to understanding your niche. I don’t think that the process of mastering something can be easy but I do believe it should be very simple if we follow a structured approach.

Focus on one instrument/idea, keep things simple and it pays off nicely in the long run 😇😇

Let me end this post with this quote – “Seek freedom and become captive of your desires. Seek discipline and find your liberty – Frank Herbert”