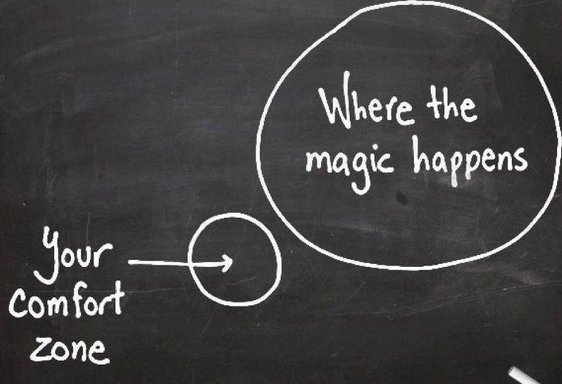 We have often heard successful people mentioning in their speeches/articles that one should ‘Get out of their comfort zone’ to taste success. What this phrase really means?

If we really break down the phrase “Getting out of your comfort zone” it means doing things that we don’t feel comfortable with doing.

1. In the 3rd century B.C, General Xiang Yu sent his troops across the Yangtze river to fight the Qin dynasty. While his men slept, he ordered all his ships to be set afire. Basically,they cant go back quitting. There is only one way ahead.

Next day he told them, you now have a choice – fight to win or fight to die. This technique was followed by the Spanish conquistador Cortes in the Sixteenth century in Mexico.

2. In World war – II, Group Captain Adolph Gysbert “Sailor” Malan of the Royal Air Force instructed rookie pilots – if you want to be a crack fighter pilot lad, learn to ditch your parachute !!

3. In Indian history, we have a great example of the battle that happened to capture Singhad fort. After the fall out of Tanaji, his Brother Suryaji cut the ropes with which the troops entered the fort and addressed them ” Either die fighting or Jump off the fort and die – Your choice” This happened around 1670 under Great Shivaji in the battle of Singhad fort near Pune.

Psychology professors Dan Ariely (he is my personal favorite) and Jiwoong Shin conducted extensive tests on subjects on why people cling onto multiple dating. They found that male and female subjects often latched on to multiple dating partners, refusing to commit to a formal relationship for the fear of losing the comfort of other date partners. They wanted the “safety” or “comfort” of numerical strength.

Often in life, we are required to burn our ships like General Xiang Yu to cut out the option of retreat from a difficult situation as a measure of self-motivation. In extreme circumstances, ditching our parachute like Group Captain “Sailor” Malan advocated becomes necessary to come out of our lazy, comfort zone.

Disclaimer: This tactic however, needs to be extremely/well thought-out and strategised. Cannot be applied to every situation in life – extreme due diligence is required !!

Nevertheless, as they say, “Life begins at the end of our comfort zone”. So, lets get out of comfort zone and the whole world is ours to explore 🙂